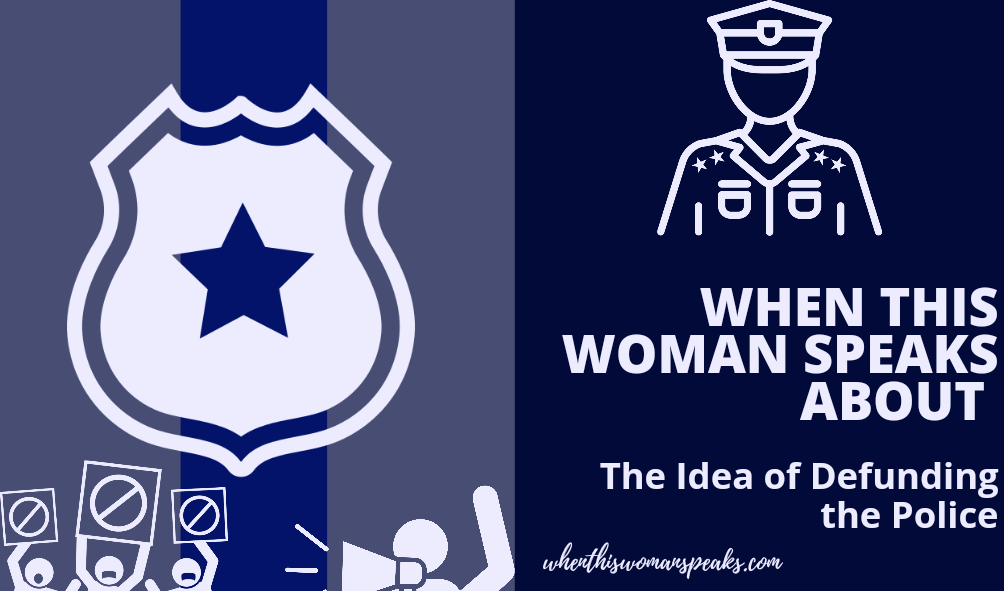 I want to speak about what I think about the suggestion of defunding the police. I think I need to give some background before I state my position in the discussion.

Across this country many cities devote a large portion of their budget to law enforcement, especially in the large cities. In smaller communities, things like prisons and police departments offer employment to people who are often educated with the basic requirements and this often means being educated at the high school level.

The requirement to be in law enforcement usually requires just high school graduation. This is a problem when you factor in that the police deal with a variety complex situations but lack the education to often deal with these situations. Yet, police make salaries comparable to college graduates and insist they need more as well as justify their large portion of the city budget.

There is a prevailing view that the police are underfunded especially for the dangerous job that they do. That is merely untrue. A police officer in the United States is a relatively safe job and it has been proven that most officers go an entire career without ever pulling their service weapon out once. You rarely hear reports of officers being gunned down, although it does happen on occasion. It usually happens the other way. Police more often gun down the citizens they are paid to protect.

There have been a lot of incidents of citizens being murdered unnecessarily by police officers acting in outrageous ways. On May 25, 2020 police officer, Derek Chauvin, kneeled on the neck of handcuffed George Floyd for approximately eight minutes in Powderhorn, Minneapolis. As a result, Floyd begs for the officer to remove his knee and is repeatedly can be heard on the video saying that he could not breathe. After a few minutes into the video Floyd is nonresponsive but Chauvin does not remove his knee. Floyd is later pronounced dead.

Witnesses record the incident which involved a total of four officers. Derek Chauvin applied his knee, one held Floyd’s back, one held Floyd’s legs, and one made sure no one intervened. It is later learned Floyd was being arrested for allegedly trying to pay for purchases at a deli with a counterfeit bill. People driving by took video footage with their phones; witnesses on the ground did as well.

The video of George Floyd and his interaction with the police was documented by a number of videos and a number of angles. When the video began to circulate and go viral on social media, the public was outraged. The phrase, “I Can’t Breathe” began to trend. As more information came out, the public began to speak out against what is widely viewed as the murder of a person based on their ethnicity. All four officers were fired the next day.

Should we defund the police?

No. I think rather than defund the police, we should divert some of their funding into programs that assist them with policing communities in innovative ways and improve community relations while also decreasing criminal behavior because what departments are doing now clearly is not working.

We can justify their current pay by requiring them to have college educations and degrees in Criminal Justice related subjects. We can also give them financial incentives to go back to school and seek higher education in order to advance.

I have a lot of critiques for the current state of law enforcement in America but that does not mean I feel the police are evil. I think that we need a definite reformation of law enforcement so that it is more efficient and as tax payers who are footing the bill for law enforcement we are not wrong to demand we get more bang for our buck especially since what we pay for now is not working properly. The problem is whenever the discussion of reformation is brought up, some people immediately accuse the person of bringing up the subject as hating the police or biased in some way against the police as a whole.

In my case, that is not true. Reformation of law enforcement is not an attack on the police, it is necessary to make the Justice system fairer by being uniform, efficient and progressive. It does not make sense that we continue funding a system fully that does not function correctly. Remember the police take a significant amount of the city budget so rather than defund, I say divert.

One of the things I think people overlook is the lack of respect some people in this country have for law enforcement. I grew up in a period of time when people had massive respect for the police. I think we should get back to having respect for police officers by using our manners when we interact with them. I have witnessed some police officers having extraordinary manners in the face of some extremely rude individuals. I would hate to get to the point where as a country we do not raise children to have respect for rules and those that enforce the rules.

We need to give moral back to the police by reforming the system. So many police officers feel attacked because it is unclear just what defund means. So many people have opinions based on there not being a set plan that everyone understands what changes need to be made and how these changes will be implemented and who will administrate what is seemingly a complete over haul of the Criminal Justice system in the United States.

So in this post I hope I was able to get my point across that no, we should not move towards defunding the police. Yes, we should continue to fund the police but justify the expense to the taxpayers by raising the qualifications and the expectations of the officers that are employed in these positions. We also should divert some of their funding into options that help make their jobs more effective and efficient.

More important than ever we need to make sure we have people in position to improve America in ways that make its citizens live better. It is important that we vote in the upcoming Presidential election of 2020 to make sure that the person in charge of this country works in our best interest, don’t you agree?